The Power of Machine Intelligence for the Business Enterprise

This blog contains material from a presentation I made to friends and colleagues earlier this year on the fast emerging trend of employing Machine Learning (ML) to address enterprise business issues. We have embarked today upon the threshold of an ML wave that is closely following the recent Big Data Analytics wave.

When I submitted my doctoral dissertation in Machine Learning 18 years ago, I recall discussions we'd have in seminars and workshops that the world was another 35 years away from these techniques making their way into the mainstream, owing to the enormous computational costs of running machine learning algorithms. At that time, only supercomputers could process machine learning programs in a reasonable time frame. That forecast has now been realised in half the time-frame that we'd estimated. In other words the speed at which computer technology is advancing in this era, is truly awesome!

The purpose of this blog is to

i) Provide a quick overview of the origin and evolution of ML
ii) Explain what the various terms and disciplines mean
iii) Discuss latest achievements and trends, including the current investment landscape
iv) Indicate what kind of future systems are imminent

I hope you find the material useful. 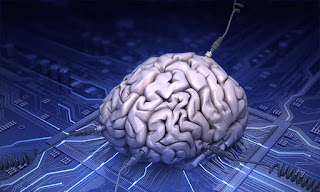 For decades researchers have worked on developing theories and techniques to create computing systems that can emulate and on occasion outperform the human brain.

THE IMITATION GAME: CAN MACHINES THINK?

The definition of how a machine can be classified as ‘intelligent’ was the work of Alan Turing in his 1950 paper “Computing Machinery and Intelligence," while working at The University of Manchester (Turing, 1950; p. 460). It is called the Turing Test.

It opens with the words: "I propose to consider the question, 'Can machines think?'"Because "thinking" is difficult to define, Turing chooses to "replace the question by another,which is closely related to it and is expressed in relatively unambiguous words."

Turing's new question is: "Are there imaginable digital computers which would do well in the imitation game?"

This question, Turing believed, is one that can actually be answered.

In the remainder of the paper, he argued against all the major objections to the proposition that "machines can think".

The Turing test is a test of a machine's ability to exhibit intelligent behaviour equivalent to, or indistinguishable from, that of a human.


Alan Turing proposed that a human evaluator would judge natural language conversations between a human and a machine that is designed to generate human-like responses.The evaluator would be aware that one of the two partners in conversation is a machine, and all participants would be separated from one another.


The conversation would be limited to a text-only channel such as a computer keyboard and screen so that the result would not be dependent on the machine's ability to render words as speech.

If the evaluator cannot reliably tell the machine from the human, the machine is said to have passed the test.

The test does not check the ability to give correct answers to questions, only how closely answers resemble those a human would give.


Artificial intelligence (AI) is the intelligence exhibited by machines or software. It is also the name of the academic field of study which studies how to create computers and computer software that are capable of intelligent behaviour.


Major AI researchers and textbooks define this field as "the study and design of intelligent agents", in which an intelligent agent is a system that perceives its environment and takes actions that maximize its chances of success.


John McCarthy and Marvin Minsky who coined the term at MIT in 1955, defined it as"the science and engineering of making intelligent machines".

The Dartmouth Summer Research Project on Artificial Intelligence was the name of a 1956 undertaking now considered the seminal event for artificial intelligence as a field. Organised by John McCarthy (then at Dartmouth College) and formally proposed by McCarthy, Marvin Minsky, Nathaniel Rochester and Claude Shannon, the proposal is credited with formally introducing the term 'artificial intelligence'.

As a consequence of these endeavours, the following popular disciplines have emerged today.


Each one of these has had significant advanced contributions from numerous contributors.

In the next sections these disciplines are described in more detail.

Cognitive Science (as per the shell diagram below) is an interdisciplinary study of the human mind with an emphasis on acquisition and processing of knowledge and information. 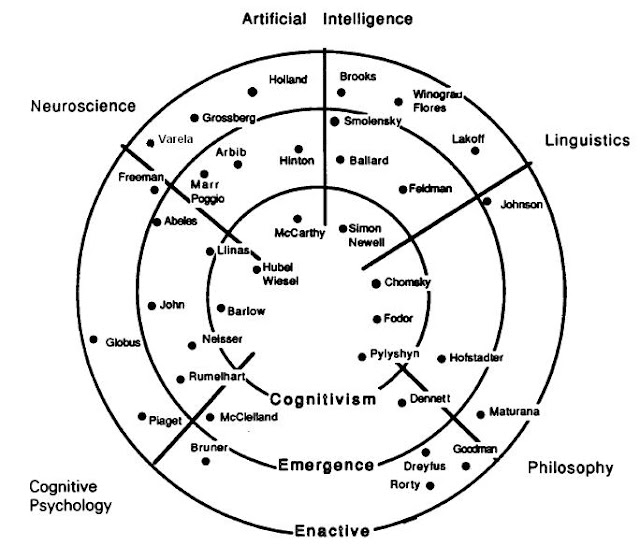 The contributing disciplines to Cognitive Science are described in the next sections.

An expert system is a computer system that emulates the decision-making ability of a
human expert.

Expert systems are designed to solve complex problems by reasoning about knowledge,represented primarily as if-then rules rather than through conventional procedural code.

Expert systems were among the first truly successful forms of AI software.

An expert system is divided into two sub-systems:

•The Inference Engine. The inference engine applies the rules to the known
facts to deduce new facts. Inference engines can also include explanation and debugging capabilities

•The Knowledge Base. The knowledge base represents facts and rules.


Linguistics is the scientific study of language.

One of the main objectives of Linguistics is to elucidate the mental and
physical processes underlying the perception and production of language. 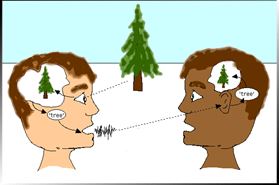 Noam Chomsky described as the father of modern linguistics, considers
language as an essential mental faculty, universally endowed to all human
beings.

He postulated that linguistic structures are partly innate, reflecting an
underlying similarity, a Universal Grammar in all human languages.

There are three major aspects of linguistic study:


Neurons (or nerve cells) are one of the main constituents of the brain. The brain’s neo cortex is involved in higher functions such as sensory perception, generation of
motor commands, spatial reasoning, conscious thought and language. Recent
theoretical advances in neuroscience have also been aided by the study of neural
networks (sub symbolic models of the neo cortex).


Cognitive psychology is the study of mental processes such as attention,language use, memory, perception, problem solving, creativity and thinking.


Philosophy is the study of general and fundamental problems, such as those connected with reality, existence, knowledge, values, reason, mind and language.

The ancient Greek word φιλοσοφία (philosophia) was probably coined by Pythagoras and literally means "love of wisdom" or "friend of wisdom." 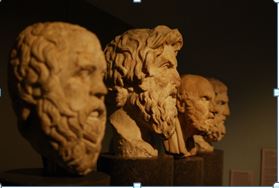 •by topic (the major topics being epistemology, logic, metaphysics, ethics, and aesthetics);


Machine Learning is a field of computer science.

It evolved from the study of pattern recognition and computational learning theory.
Machine Learning explores the construction and study of algorithms that can learn from data and make predictions. Common examples of Machine Learning
applications are spam filtering, optical character recognition (OCR), search engines and computer vision.

In business contexts Machine Learning methods may be referred to as Predictive Analytics.

Examples of Machine Learning algorithms are

A longer list of Machine Learning applications are as follows 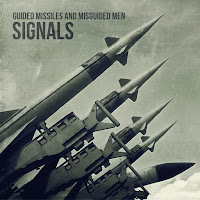 
Deep learning (deep machine learning, or deep structured learning, or hierarchical learning,
or sometimes DL) is formally defined as a branch of Machine Learning based on a set of algorithms that attempt to model high-level abstractions in data by using model architectures, with complex structures or otherwise, composed of multiple non-linear transformations.

More informally Deep Learning is merely a buzzword, or a rebranding of Artificial Neural Networks with multiple ‘hidden layers’.

The term "deep learning" gained traction in the mid-2000s after a publication by
Geoffrey Hinton and Ruslan Salakhutdinov showed how a many-layered feed forward
neural network could be effectively pre-trained one layer at a time, treating each layer
in turn as an unsupervised restricted Boltzmann machine, then using supervised back propagation for fine-tuning.

The real impact of deep learning in industry started in large-scale speech recognition around
2010 following a project conducted at Microsoft Research by Geoff Hinton and Li Deng.

Their work is focused on both improving existing machine learning products at Google and
also to help in dealing with the growing amount of data that Google has.

Towards the end of 2013, Yann LeCun of New York University, another Deep
Learning guru, was appointed head of the newly-created AI Research Lab at Facebook.

Up to the 1980s, most NLP systems were based on complex sets of hand-written rules.

NLP is closely related to Computational Linguistics, a field concerned with the statistical or
rule-based modelling of natural language from a computational perspective.

A recent powerful application of NLP is semantic search (improving search accuracy by
understanding the searcher’s intent and context to generate more relevant results) by Google.

WHY MACHINE INTELLIGENCE TODAY IS SUCH A ‘HOT’ TOPIC

While researchers have been working on these disciplines for over 5 decades, there existed earlier a major roadblock to migrating these techniques from the Research Lab to the Business Enterprise.

It was the enormous computational expense involved.

Today this is no longer an issue.

The good news is that enterprise servers today have the computing power and capability of
yesterday's supercomputers!

Servers, processors, processing memory, network and storage capabilities and speeds today are hundreds of times greater than they used to be.

As a consequence highly complex computing algorithms/data processing involving enormous volumes of data can be run in a few minutes, even seconds, instead of days and sometimes weeks.

Business automation has come a very long way since the early days of calculators and vending
machines.

These are multi-tiered complex ‘traditional’ software systems that run on distributed computer infrastructures and exhibit high-performance in terms of speed and user-loads. Such systems may include advanced logical reasoning and some analytics, but do not have machine intelligence features yet.

However the Business Enterprise is now migrating at a fast pace towards the new ‘digital’ world
of Cloud, Mobile Apps, Social Media and Big Data Analytics.

With the plethora of data (big data) available on these digital platforms, leading organizations such as
Google and Facebook are hiring the gurus of Machine Learning to make their platforms and offerings smarter.

Thus the next generation of ‘Enterprise Machine Intelligence Systems’ is imminent!

Recent machine intelligence enterprise-level developments/achievements are the outcome of
varied and multi-disciplinary integrated contributions from various traditional areas of study.

Some of these are presented as follows

Numenta is a machine intelligence company that has developed a cohesive theory, core
software, technology and applications based on the principles of the brain’s neo cortex.

It is essentially a set of tools and a runtime engine, including embedded learning algorithms, that enables self-training and pattern recognition based on the theories of hierarchical temporal memory.

BayesiaLab is a universal analytics platform (available for Windows/Mac/Unix), which provides scientists a comprehensive “lab” environment for machine learning, knowledge modelling, diagnosis, analysis, simulation, and optimization - all based on the Bayesian network formalism, a probabilistic graphical model. 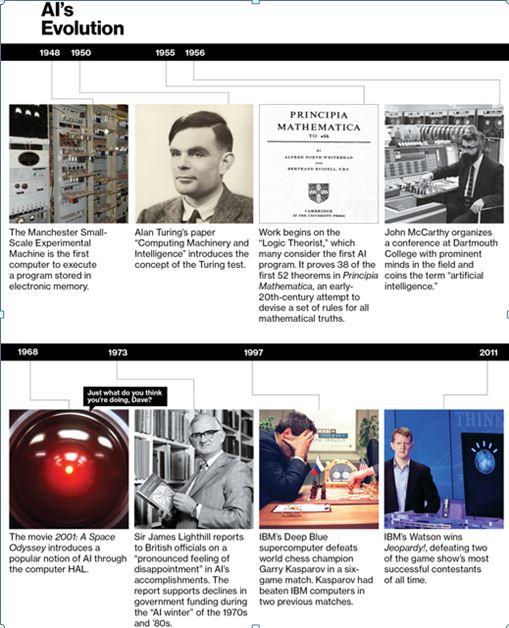 
What kind of human reasoning processes can they emulate and improve upon?

What range and kind of business enterprise problems can they resolve?

What kind of future systems are we seeking to build?

However the list of potential future developments is clearly without limit.

The Investment Landscape today for AI start ups looks very promising as per the following diagrams. 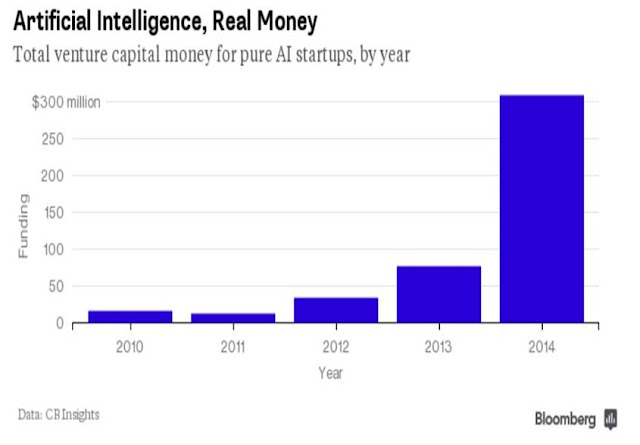 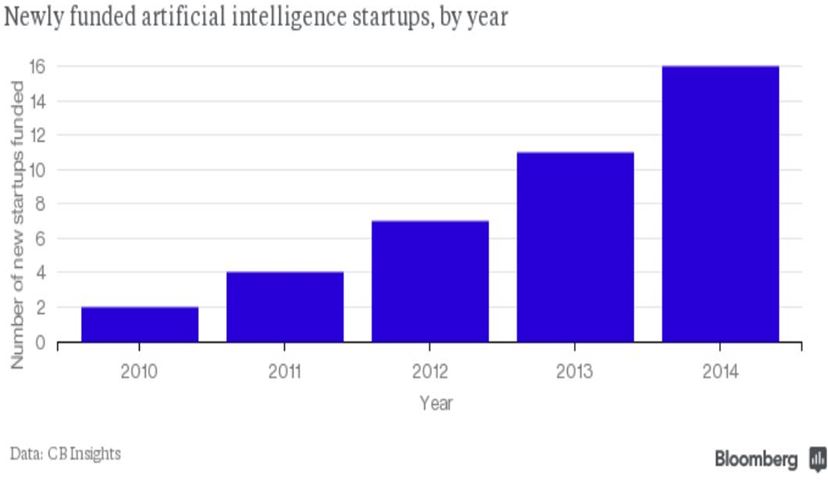 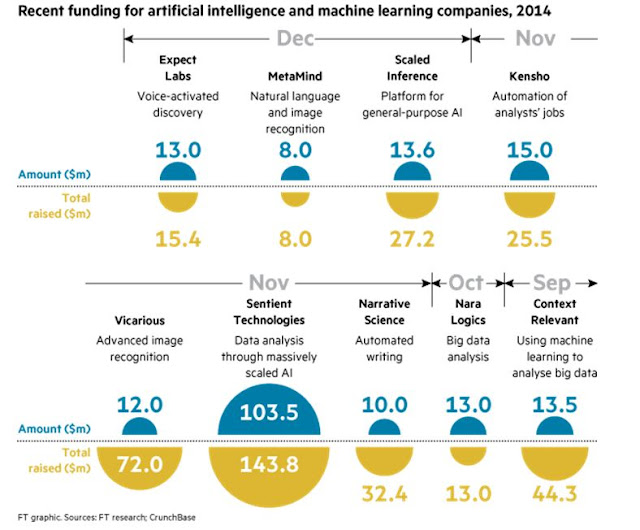 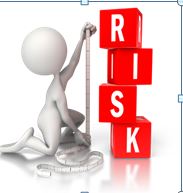 Are there risks/challenges in building Enterprise Machine Intelligence Software?

A number of pessimists (including eminent scientist Stephen Hawking) have warned that ‘recreating the power and creativity of the human mind in software’ is fraught with risk and ‘could see the human race become extinct’.

However Machine Intelligence at this point of time is merely the deployment of advanced reasoning and search methods which present day enterprise servers have the grunt to support.

At this point in time we are nowhere near "recreating the power and creativity of the human mind in software" as these persons appear to think.

Nonetheless it is worthwhile setting up some regulatory guidelines for this emerging technology.

achine Intelligence for the Business Enterprise